Money creation in the modern economy

Money creation in the modern economy
By Michael McLeay, Amar Radia and Ryland Thomas of the Bank’s Monetary Analysis Directorate

• This article explains how the majority of money in the modern economy is created by commercial banks making loans.
• Money creation in practice differs from some popular misconceptions — banks do not act simply as intermediaries, lending out deposits that savers place with them, and nor do they ‘multiply up’ central bank money to create new loans and deposits.
• The amount of money created in the economy ultimately depends on the monetary policy of the central bank. In normal times, this is carried out by setting interest rates. The central bank can also affect the amount of money directly through purchasing assets or ‘quantitative easing’.

Overview
In the modern economy, most money takes the form of bank deposits. But how those bank deposits are created is often misunderstood: the principal way is through commercial banks making loans. Whenever a bank makes a loan, it simultaneously creates a matching deposit in the borrower’s bank account, thereby creating new money.

The reality of how money is created today differs from the description found in some economics textbooks:

Although commercial banks create money through lending, they cannot do so freely without limit. Banks are limited in how much they can lend if they are to remain profitable in a competitive banking system. Prudential regulation also acts as a constraint on banks’ activities in order to maintain the resilience of the financial system. And the households and companies who receive the money created by new lending may take actions that affect the stock of money — they could quickly ‘destroy’ money by using it to repay their existing debt, for instance.

Monetary policy acts as the ultimate limit on money creation. The Bank of England aims to make sure the amount of money creation in the economy is consistent with low and stable inflation. In normal times, the Bank of England implements monetary policy by setting the interest rate on central bank reserves. This then influences a range of interest rates in the economy, including those on bank loans.

In exceptional circumstances, when interest rates are at their effective lower bound, money creation and spending in the economy may still be too low to be consistent with the central bank’s monetary policy objectives. One possible response is to undertake a series of asset purchases, or ‘quantitative easing’ (QE). QE is intended to boost the amount of money in the economy directly by purchasing assets, mainly from non-bank financial companies.

QE initially increases the amount of bank deposits those companies hold (in place of the assets they sell). Those companies will then wish to rebalance their portfolios of assets by buying higher-yielding assets, raising the price of those assets and stimulating spending in the economy.

As a by-product of QE, new central bank reserves are created. But these are not an important part of the transmission mechanism. This article explains how, just as in normal times, these reserves cannot be multiplied into more loans and deposits and how these reserves do not represent
‘free money’ for banks.
[…]
Bank of England – Quarterly Bulletin 2014 Q1 – PDF [14 Seiten]

Money creation in the modern economy

Recent talk about deflation in the euro area has evoked two kinds of reactions. On one side are those who worry about the associated prospect of prolonged recession. On the other are those who see the risk as overblown. This blog and the video below sift through both sides of the debate to argue the following:

I. Is there deflation?

By this definition, the term “deflation” is arguably overstatement.

First, on geographical scope, recent price changes have been positive in all but 3 countries (versus 12 countries as recently as 2009). 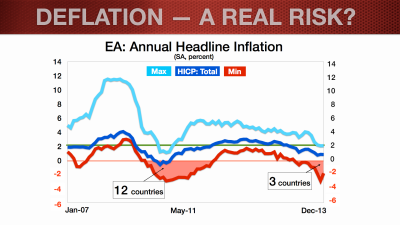 Second, regarding incidence across goods and services, outright price declines account for only a fifth of the HICP basket — not a high share and, again, no more than in 2009, when the event passed without deflationary consequence. 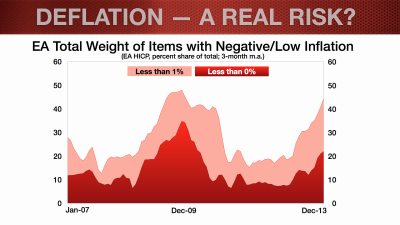 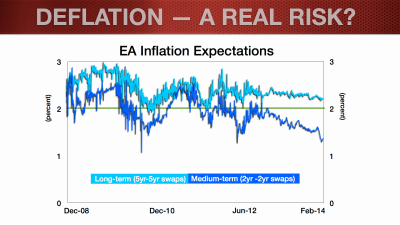 II. But if it’s not “deflation”, what’s the problem?

In the current European context, even very low inflation can scupper the nascent recovery and pressure the most fragile countries.

Both deflation and less-than-previously-expected inflation increase the real burden of existing debt and the real interest rate that borrowers pay. As it happens, the countries with deflation/low inflation, marked red in the chart below, also happen to be the ones with already higher debt burdens (private + public) and real rates, and include all the countries that have been under market pressure during the crisis. 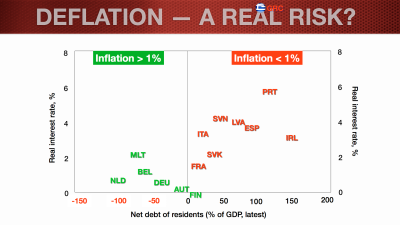 While deflation/lower inflation in high debt countries is painful to them, at least it improves relative prices, and hence exports and current account sustainability. Unfortunately, when inflation turns low everywhere in the euro area, each unit of deflation/low inflation endured by indebted countries delivers less price adjustment relative to the surplus countries. Or put another way, each point of relative price adjustment must be bought at the cost of greater debt deflation.

When demand drops and nominal wages are sticky, the hit to unemployment is cushioned by any on-going inflation, which effectively lowers the real wages that firms pay. That cushion is now badly needed. In Spain, we see in the next chart that, after the crisis, the wage distribution slammed against the zero-barrier, with 30% of the distribution concentrated there. Given sticky nominal wages, near zero inflation in Spain is not helping to resolve the severe unemployment problem there. 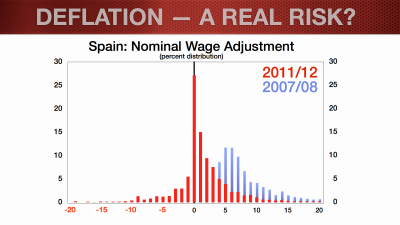 III. What are the lessons from Japan’s experience?

There are at least two. 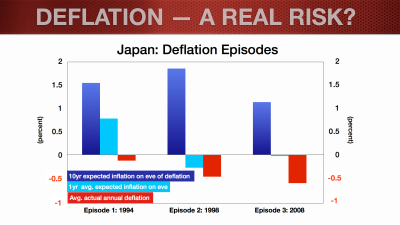 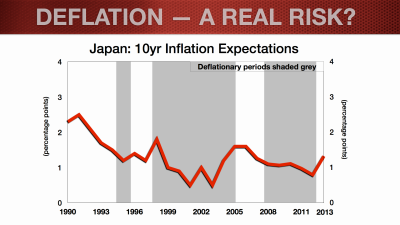 One needs to act forcefully before deflation sets in. As shown below, the Bank of Japan was relatively slow in lowering policy rates and ratcheting up base money. In the event, it had to resort to ever-increasing stimulus once deflation set in (shaded grey areas in the second chart). Two decades on, that effort is still ongoing. 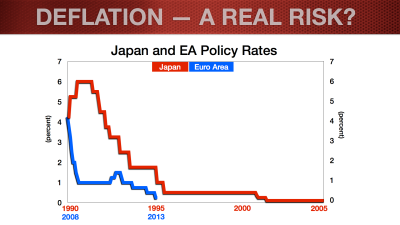 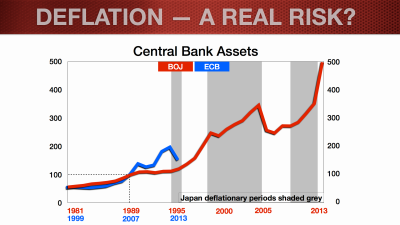 You can have too much of a good thing, including low inflation. Very low inflation may benefit important segments of the population, notably net savers. But in the current context of widespread indebtedness problems, it is working to the detriment of recovery in the euro area, especially in the more fragile countries, where it is thwarting efforts to reduce debt, regain competitiveness and tackle unemployment. The ECB must be sure that policies are equal to the tasks of reversing the downward drift in inflation and forestalling the risk of a slide into deflation. It should thus consider further cuts in the policy rate and, more importantly, look for ways to substantially increase its balance sheet, be it through targeted LTROs or quantitative easing (public and private asset purchases).

„III. What are the lessons from Japan’s experience?“
finden sich im Blog-Archiv: